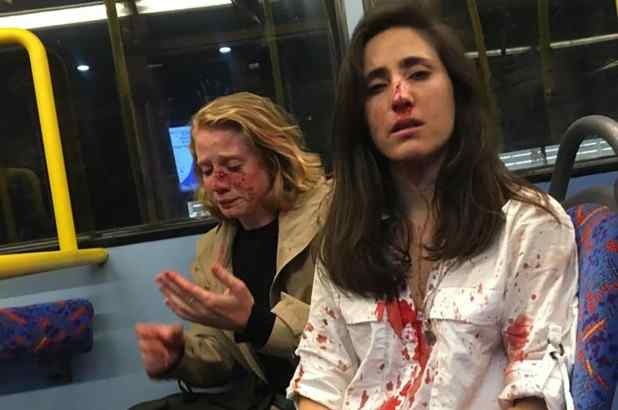 For anyone who had a doubt regarding the public display of affection in LGBT couples, hate crimes still exist, even in civilized countries. This is also the case of two women who were returning from West Hampstead on a London bus at night, who ended up being physically attacked because of their sexual orientation.

Melania (28) and Chris (29) were subjected to several homophobic remarks and asked to kiss for the entertainment of a group of teenagers – when they refused, they were brutally attacked. Melania stated that this anger mainly came from the fact that they were perceived as “sexual objects” rather than people, being a crime against women above all, and then a crime against lesbians. This is clearly suggested by the fact that the teens started talking about the girls being lesbians and about sexual positions as soon as they saw them kiss.

As the attack became viral, Chris said that, just because they got more attention for this, it doesn’t mean that it doesn’t happen in other places as well. Sadly, this couldn’t be more accurate – LGBT couples from all over the world avoid publicly displaying their emotions out of the fear that they might risk their lives.

Gladly, people have not remained silent about this event – the singer Halsey actually stepped up and held a short speech during one of her concerts on LGBT issues. While wearing a T-shirt with the viral picture of the couple during the attack, where they both had bloodied faces, Halsey chose to criticize a recent attempt in Boston of organizing a “straight pride parade” as well.

In the beginning, she said: “The sad reality is that, after the pride parades are over and after the bars close their pride nights, when the glitter is being swept out of the streets, a lot of people get on those trains, get on those buses, and try to wash the rainbows off their bodies and peel the stickers off their clothes. Because when pride is over, it’s not safe to be gay anymore.” Sadly, a big part of the audience was able to empathize with her words, as this is a global problem.

At the end of the speech, she showed a lot of support towards the LGBT community and encouraged her fans to be brave when faced with discrimination. This is a great example of awareness and representation in terms of LGBT issues, and such an initiative has certainly generated a change, at least within some of those who were present.

Sadly, this is one of the most efficient things people can do at the moment in terms of tolerance and inclusion. Famous people taking advantage of their recognition are able to change the general mentality more than they think – and even if you’re not famous, you can still take your time to instill these ideas in others.